I went to live in Japan back in 1992 after completing college.  As an avid polyglot, I aspired to comprehend Japanese and learn more about the history of the culture.  The Japanese language is a fusion of the geographically native phonetic language dating back millennia that melded with the imported pictographs of Chinese script just around 1000 years ago.  (The Franco-Germanic languages had had a similar style of encounter with Latin which give us English.)  I was curious to study these pictographs, as they seemed such a fascinating view of the rudiments of thought and language.  They derive directly from storytelling through paintings.

Chinese became suffused into Japanese language with the spread of Buddhism, arts and architecture across the Japanese archipelago in the feudal era.  Chinese scholars were hired into the employment of the courts and merchant industry of Japan, documenting the events of the day and the dealings of business and politics.  The academic description of concepts became root stems of Japanese vocabulary.  The phonetics of Japanese speech were draped around the Chinese script to indicate the pronunciation of the characters.  It’s a fascinating language to study for people inclined to delve into linguistics.

Japanese culture has a fascinating tendency to revere arts in their original form.  You can see tea ceremony, archery, ikebana, kabuki and Buddhist Noh theater performed today much the way it first was practiced hundreds of years ago.  Because I chose to live near Kyoto, the “spiritual heart” of Japan, I was able to see very traditional Buddhist temples and ceremonies as they first were practiced when Zen Buddhism was introduced to Japan over 700 years ago.

Zen isn’t necessarily a new concept in Buddhism.  It’s an interpretation of an old concept embedded deep within the tradition.  Hundreds of years after the life of Gautama Siddhartha, the lore of his teachings had climbed over the Himalayas and been re-interpreted into Chinese derivations of the philosophy.  Allegedly a monk referred to as “Boddhidharma” (name meaning literally “enlightenment path”) represented the concept of individual’s journey to enlightenment through meditation to China.  Zen in modern Japan refers to this concept in isolation from the broader concepts of Buddhism in the culture.  While many people attend temple in a religious process to this day, the monastic tradition of pursuit of inner-insight that emulates the original enlightenment insight of Siddhartha is what Zen embodies.

Scattered through the mountain ranges around the geographical epicenter of the island of Honshu are monasteries where you can practice zen in temples that are preserved in much the same form of their originals.  Eihei-ji is one of the earliest Buddhist temples in Japan, founded by the monk who brought Buddhism from China.  Even today, the temples which span the hillsides outside of Fukui offer weekend retreats where common citizens can live with the monks for a short stint to experience monastic Zen lifestyle.  I decided to try this to experience first-hand what I’d read from Alan Watts and various descriptions of the Zen tradition. 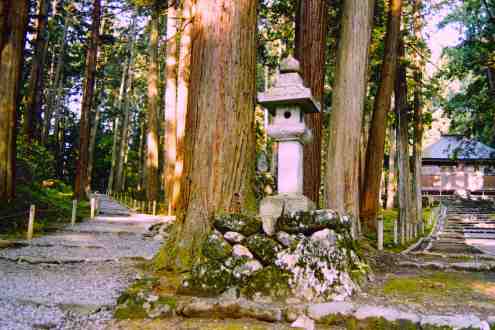 For those who are unfamiliar with the practice, it might help to describe the “act” of meditation.  There are many disciplines of guided meditation or prayer around the world.  Zen is not a particular way of thought that is instructed.  It’s a pattern of behaviors that the practitioners go through to put the mind in an optimal frame to set the stage for transcendent awareness.  As such, there is not a “thing” you are to focus on when practicing.  The process of focus is to let go of thoughts that keep one anchored to distractions of daily existence.  Ideally, you will let go of the mantras of self identity that keep you confined in a limited frame of awareness.  What you are to understand or perceive once you set down the yoke of self anxiety is itself rather amorphous.  The “dharma” talks of the monks in the study of the tradition of Buddhism tend to refer to musings of millennia of disciples and teachers from the tradition.  While there is plenty to read from the traditions of teachers, there isn’t a particular hierarchy of importance of knowledge of others’ insights.  The ultimate end, is to become aware of one’s own most transcendent inner awareness of being.

What the ultimate transcendent awareness is meant to be is the matter of much debate and opinion.  According to the lore of the tradition, enlightenment involves full awareness of (and detachment from) the cycle of Samsara.  Samsara comes from the Hindu tradition, out of which Buddhism emerged over 2500 years ago.  Generally it refers to suffering in all forms.  More abstractly it signifies time and the inexorable cycle of life and death as depicted in this thangka painting. 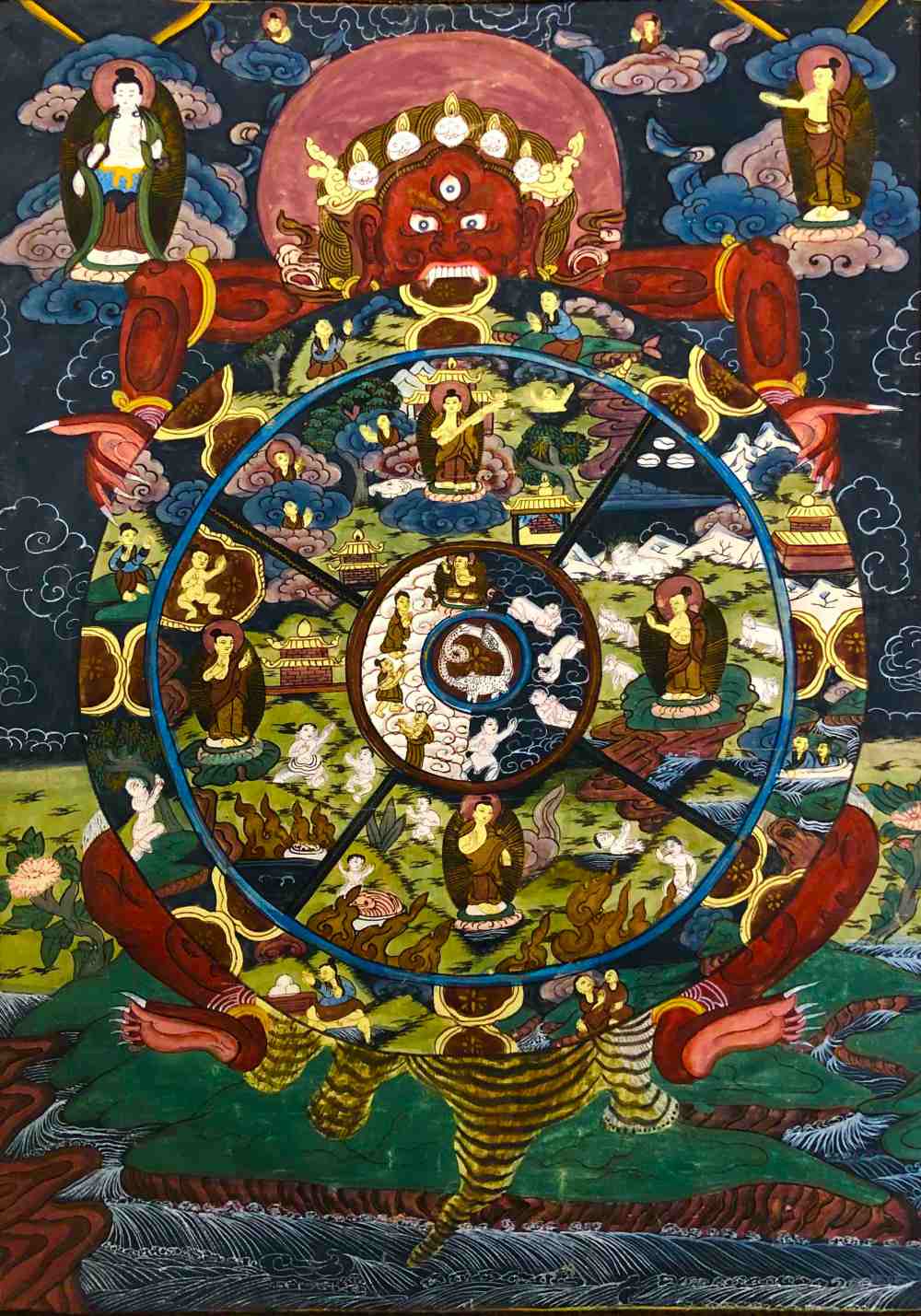 While Samsara is often depicted as a cycle of life within the jaws of the quasi-demonic presence of the god Mahakala, he is not an evil demon so much as an unavoidable presence that humans generally react to from a fearful vantage because we are within Samsara.  If you are able to abstract yourself from Samsara, and our typical dependence on the idea of attachment to the context of our ordinary plane of existence, the idea of anything being fearful falls away from our awareness and we are able to see all aspects of beauty and torment as being in balance within the glory of existence, comprehended on a different scale.  So the thangka shows the monk/sage within the jaws of Mahakala as a mortal, while also depicting the monk/sage as existing outside the jaws of Mahakala’s cycle of destruction.

So, how are you to embark on this voyage of transcendent awareness?  The way we were demonstrated to attempt was to sit on a cushion.  We were to sit just a few feet away from a wall, keep our spine vertical, our eyes relaxed but not focusing on the wall.  After a bell was rung, we were to allow thoughts to dissipate without focusing on them.  The voyage of insight is to come from the path of perception that results from minimal motion and the practice of relinquishing focus on the distractions that flood the mind. And everyone has to follow their own path on the journey to that ineffable realization.  There were no tools to guide the journey.  If Gautama could do it, then anyone can!  While we sat like statues with our hands in our lap, there was to be no other effort for the meditation.

As I meditated, I was aware of dozens of others focused, just like I was, on stillness.  There was a sense of dedicated momentum from the group’s shared focus.  This is perhaps why the Sangha, one’s community of joint practitioners, is important in the teachings.  I could hear wind outside.  I could smell faint fragrance of tatami mats that formed the flooring for the room and the wafting incense that had been offered at the nearby temple.  (The Zendo isn’t in the temple, where dharma talks happen.  It’s a somewhat dull room where the zafu cushions are lined up, specifically for the purpose of zazen sessions.) . A monk walked between the practitioners and would, if requested, give a slight whack on the shoulders with a bamboo stick to awaken you if you felt the encroaching of desire to fall asleep.  Whacks on shoulders are not a necessary tool of meditation, just a defense from sleep.  Occasionally, I heard the splash and knock of a bamboo fountain outside.  Like the bamboo stick, I thought it was to draw the attention back to the present as the mind drifted.  The head monk said later it was just to scare the deer away from eating the monk’s garden!

Everything at the monastery is conducted ceremoniously.  In eating, we read a meditation on mindfulness on how we should focus, appreciating every morsel without thinking of the next morsel.  Upon the last bite we were to swab the dish with a radish pickle which was our last bite, to ensure no food remained in the bowl.  Then, in cleaning the monastery, we treated every part of the grounds as if it was to be as revered as the temple itself.

There has long been a debate on graven images in Buddhism, just as there has been in the Judeo-Christian traditions.  Various euphemisms have been used over time to refer to the historical Buddha in indirect references.  (As a chair, as a wheel, as a footprint)  The depictions of sculptures of Buddha images (or various mythical embodiments of the pantheon of mystical Buddhas and Boddhisattvas such as Avalokiteshvara) are meant to hint at the presence of something inside of the viewer rather than the concept of a divinity outside of oneself.

The experience of staying at a Zen monastery is much like hiking in the mountains.  There are no crutches of conventional society to define you in that context.  It’s something you endeavor on, which makes you feel awe from the shift in perspective you undergo when you give up doing the things that reflect your identity back to you.

It is very comforting to be in a stillness you experience at the temple like Eiheiji.  If you ever find yourself to be overwhelmed by the cognitive load of modern life, I recommend you consider trying it.  But ultimately, if you’re not a monk, you go back to your conventional way of life.  And you bring the context of the meditative retreat back with you.  And you try to stay grounded in whatever you realized while staring unfocused at the wall.  For, as Thich Nhat Hanh taught, “If you can only be at peace where it is peaceful, what good is your peace?”